John’s lifelong interest in the clarinet began aged 13. By the age of 16 he was a Junior Exhibitioner at the Guildhall School of Music and much later, after private lessons with the renowned clarinettist Thea King, he obtained his teaching and performing diplomas as an external student at the Royal College of Music in London. While still a student he played with two other doyens of the clarinet, Jack Brymer and Alan Hacker.

In the course of many years he has acquired alto and tenor saxophones, a basset horn and a bass clarinet. He has played professionally on the bass clarinet in the Nederlands Promenade Orkest and on the basset horn and clarinet with Ensemble Esprit and the Herman Strategier Begeleidingorkest. In the Netherlands he has received postgraduate instruction from Sjef Douwes. He remains active as a player and as a clarinet teacher, even preparing pupils for conservatoire and giving coaching to amateur ensembles. 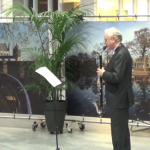